The Life of Adua Cariello 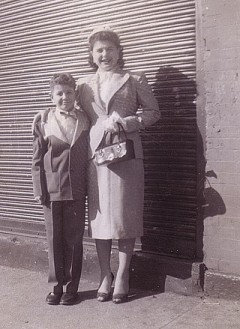 Adua Cariello, born in 1938 in the mountains of Italy, lived in Saint Angelo de Lombardi. Her father, Vincezo Castellano, was a mason who served in the Italian army, where he built bridges. He spent seven years in Albania and eight in Africa, during which he was allowed visits back home to see his wife, Rosa. They had eight children, Maria, Annunziata, Nicolina, Adua, Teresa, Carmine, and twin boys, who died a few days after birth. Vincenzo named his fourth daughter, Adua, which was the name of the beautiful African village he had been just before her birth.

When Adua was five, the family had to evacuate their home. World War II was beginning and the Germans were coming. The family relocated to an abandoned farmhouse, where they lived for about six months. When Vincenzo received word that American soldiers were now occupying their village and their home, the Castellano family went back home.

The American soldiers were using their house as a hospital and had it covered with green netting, grape vines, and brush to camouflage their location from the air. When the Americans left town, the villagers were allowed to return to their homes.

Afterward, a horrifying accident occurred. As Adua and her eight-year-old sister Nicolina were playing outdoors, Nicolina stumbled upon a green object. Little did she know it was a live grenade. While innocently playing, she pulled the pin and the grenade exploded, blowing off her hands and severely burning the rest of her body. Everyone ran over to help, but there was nothing anyone could do. Nicolina was unconscious and died the next day.

The Castellanos were not the only ones to be affected by unexploded ammunition. A neighboring farmer was plowing his land, when one of his two oxen stepped on an explosive and was killed. The farmer and other ox were merely wounded. Many times when unexploded ammunition was discovered in the village, the local officials would contact the army to come and remove the explosives.

After about ten years, Vincenzo decided he wanted a better life for his family because after the war, life in the countryside became even more difficult. He decided to try life in America. Vincenzo’s brother and sister had already moved to the United States, and they told him that life there was great and held more opportunities. The family did not have enough money to buy passage for everyone, so they had to divide. Vincenzo and Rosa decided that Vincenzo, Auda, and Carmine would go first. By this time, the eldest daughters, Maria and Annunziata, were already engaged to be married and wanted to stay in Italy. Teresa was only thirteen and thought to be better off staying with her mother. Auda was old enough to handle responsibility, but too young to be married. Carmine was the only boy, and his parents wanted him educated in America. Vincenzo, Adua, and Carmine had a tearful good-bye, knowing they were not going to see one another for a long time. They went to the American consulate, got physicals and vaccinations, and made their journey to America by passenger ship. The trip lasted two weeks. Auda was seasick the whole time. The ship landed in Brooklyn, where it was met by Adua’s aunt and uncle.

Back in 1954, there was no public assistance for immigrants. To come here, there were three things required: a sponsor, someone to support you until you had a place to live on your own; $1000 (per person) in the bank under your name; and a job waiting for you. Vincenzo’s brother was a truck driver in Brooklyn, and his boss, as a favor, agreed to fill out a form that said he would give Vincenzo a job. Vincenzo never actually got the job because it required an American driver’s license and the ability to speak English.

While living with her aunt for the first nine months, the family settled into its new life in America. Carmine was enrolled in Catholic school. Vincenzo took a job setting up the pins at a bowling alley—a job that did not require him to speak English. Adua attended school a half-day a week. So, she was able to hold a full-time factory job as a seamstress. In addition, Adua did all the cooking, cleaning, and caring for her little brother. Eventually, Vincenzo found a better paying job as a longshoreman and also used his skills as a mason on construction jobs.

When Adua was seventeen, she was out for a walk when a handsome young man named Tony Cariello, who was working on his ’54 Chevy, noticed her. Tony remarked to his cousin how beautiful he thought Adua was and wanted to meet her. Back then, if you wanted to date a girl, you had to ask permission from her father. Tony’s cousin said to him, “My father plays cards with her father. They are the Castellano’s. They moved in down the block.” Tony arranged to meet Vincenzo to ask about dating Adua. Tony’s uncle asked Vincenzo if Tony could take Adua out on a date. Vincenzo said, “No! Adua has too many responsibilities taking care of her brother and the house. She has no time to date. You’re welcome to come here and visit her while I am home, but you cannot take her out until her mother gets here from Italy.”

So, Tony continued to visit Adua. They were married in 1957. The family saved enough money to send for Rosa and Teresa, who arrived in time for Adua’s wedding. Annunziatta and her husband moved to America a few years later. Maria remains in Italy, living in the same house in the countryside. Adua and Tony had six children—Frank, Vinnie, Elaine, Anthony, AnnMarie, and Joseph. They grew up in Brooklyn and later moved to a suburb of New York City, where Adua and Tony still reside today.

Center for Italian and Italian-American Culture

Rosanna Imbriano, who submitted this story, is the Executive Director of The Center for Italian and Italian-American Culture in Ceder Grove, New Jersey.

The Center is committed to furthering the positive contributions and achievements of Italians and of Americans of Italian heritage in our society and to encouraging recognition of those values that are uniquely derived from the Italian heritage.

The Center provides an educational and cultural focal point for all Americans to come to know and better understand the history of the Italian people, their arts, their music, their language, and their traditions.

To join or contribute to this wonderful organization please visit them at The Center for Italian and Italian-American Culture.

Join in and write your own page! It's easy to do. How? Simply click here to return to "Italian American Ancestry".