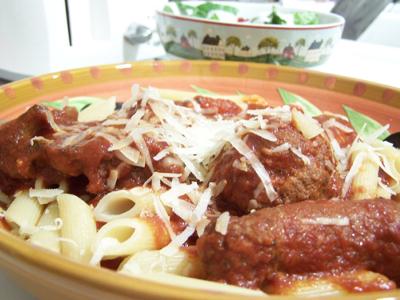 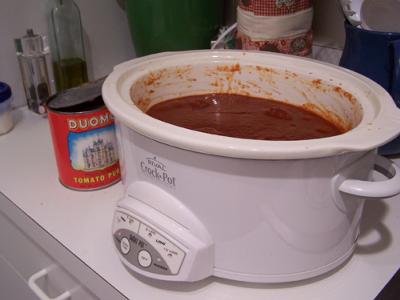 Half-batch in the slow cooker 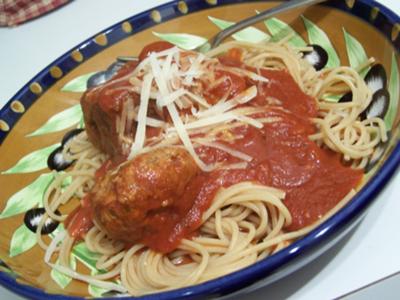 Born to Sicilian parents on Long Island and raised in Queens before moving to the Chicago area, the word ?pasta? was not really in Dad?s lexicon. All pasta was called ?macaroni,? and the sauce was ?red sauce? or ?tomato gravy.? Dad?s ?gravy? (the way his mother taught him to make it) is a vegetarian?s worst nightmare. The variety of meats contained in the sauce is the whole linchpin to the flavor. Without the meat, it is just runny red stuff. However, we didn?t eat this sauce every day ? the way to do it is to freeze a few batches for later, or the arrival of last-minute company. We sometimes called it the "Sunday" sauce: watching episodes of "Samurai Sunday" and "Star Trek" after church, waiting with baited breath while the sauce simmered away in preparation for one big afternoon meal. (You'll be glad you skipped breakfast, and you won't be wanting dinner.)

Making this sauce is one of the only occasions on which I will buy red meat to prepare at home. And truly, it just has to be red meat. I?ve tried the sauce with all turkey-based products, and the outcome is nothing similar. So if you?re gonna do it, go for it, and ask the animals? spirits to forgive you afterward.

The sauce contains the Holy Meat Trinity: meatballs, Italian sausage, and short ribs. My brother prefers to use a leaner meat, like pork chops, instead of the short ribs (we argued about this once in the meat section of the grocery store, much like my dad and his sister were prone to doing). Well, Dad tended to use what was on sale. But for me, my memory is strongly attached to that tender short-rib meat falling off the bone after slow-cooking. You can use boneless short ribs, or just fish the bones out before serving.

You prepare the meatballs, sausage, and short ribs as follows. Then you simmer them all in sauce, in a gigantic sauce pot or a couple of large standard pots, for half the day. That?s pretty much it. So here are the ingredients, one at a time:

Meatballs:
I like to use about three pounds of meatloaf mixture, or a mix of beef, pork, and veal. (I usually do the beef and pork). Again, it is the mix of different types of meat that is really key here.

* about a half cup of Italian-seasoned breadcrumb
* one meduim, thinly diced yellow onion
* two or three cloves of minced garlic
* about 1/2 cup finely chopped parsely
* two eggs
* one cup of milk and a little water
* salt and pepper
* a couple of shots of worcheshire sauce

Hand-mix the meatball mixture. Start slowly with the breadcrumb ? too much will take away from the flavor of the meatballs, and cause your cantankerous Zia to complain that ?those meatballs were just terrible? that?s all I gotta say.? Make sure that the mixture is still moist when you form the meatballs, but not too wet.

Dad used to brown the meatballs in oil. To me, this is a bit time-consuming, and adds a little more fat than you really need for flavor. I prefer to put the meatballs on tin foil atop a cookie sheet in a really hot oven while I brown the rest of the meat. You have to brown all the meat. You need that caramel-y flavor, and it seals the juices inside the meat. Trust me, I?ve skipped it before. Don?t skip it. The meatballs, especially, will fall apart in the sauce if you skip this part. So ? 375-400 degrees, for ten to fifteen minutes. They just need to be brown on the outside, and they will still be raw on the inside. Note: Let the sauce simmer for about an hour-and-a-half before you add the meatballs, or else they will fall apart too early.

Brown the sausage in a skillet, and then place them in a large sauce pot. Again, the meat will be raw inside.

Short Ribs:
I use two packages. I like to trim some of the mega-fat off the ribs, but not all of it. I also trim off the membrane that?s on the side. Then I sprinkle the meat with garlic powder, salt, and black pepper. Then you brown the meat in a skillet, drain them a bit on paper towels, and put them each in the large pot with the sausage.

Sauce:
These proportions will make the one giant batch of sauce that dad used to make:

* Two large cans of tomato puree (28 oz.)
* Two small cans of tomato paste
* One of each empty can (one in the large puree can, and one paste can), filled with mostly water and about a third red wine
* Four minced cloves of garlic
* Italian seasoning to taste ? about 1/8 to 1/4 cup (use minced fresh oregano and basil if ya got ?em)
* A sprinkle of red pepper flakes, to taste
* Salt (start with about 1/8 cup or a couple healthy pinches) and pepper

Making it:
This takes at least four hours. Five is better. Stir all the ingredients, starting slowly on all the seasonings. Then bring it to a boil, and lower it to a simmer. Every twenty minutes or so, use a tablespoon to skim off the deep red grease from the top. When you?ve skimmed it, stir it again. Wait and then skim, stir again. After an hour or two, add the meatballs and continue. If it needs more seasoning, add it. The sauce starts off very watery, but remember, it will reduce and thicken a lot with the lid off. If it thickens too much, you add more wine or more water.

My problem was that some of the meat always stuck and burned to the bottom, no matter how diligently I stirred it. I think this is because I can?t shell out the dough for a decent stock pot (large ones with a non-stick base are expensive), and the metal on mine is very thin. Also, all that meat sinks and there is so much of it, it becomes very difficult to push it around without breaking it all apart.

So I came up with a solution. Now, I brown all my meat, lots and lots of it, and split it into smaller batches (still raw inside.) I put packets that each contain a few meatballs, a couple of sausages (halved so that they are easier to manage on a fork), and a couple of short ribs into the freezer in foil. Then, when I want sauce, I just unwrap one packet of frozen meat and put it into the crock pot (including the meatballs ? you can add them all at once this way). I add half of the amount of liquid in a normal batch: one can puree, one can paste, and about one can (of the puree) or the water and red wine. I season it, turn it on, put the lid on it, and walk away for five hours. Then I only skim it once or twice just before we eat it. Much easier, and no burning at the bottom.

Hope you decide to take it on. It takes some personal tweaking, but making this sauce, again and again, is the type of tradition family is built around. Trust me. And you gotta go all the way if you?ve come this far ? tons and tons of parmesano or romano, and real garlic bread to mop up what the pasta left behind.