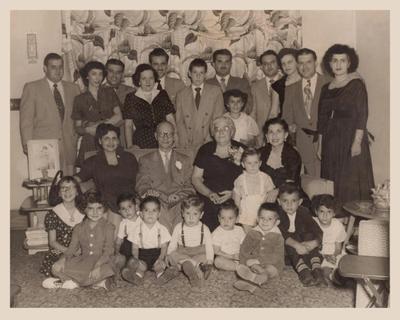 Our family circa 1950. Don't you just love the style of dress?

My family's dream of America began in the aftermath of World War I, during the rise and persecution of sociofascist Benito Mussolini. Unfortunately, the specter of newly-enacted U.S. immigration quotas forced la mia famiglia Pisani to first emigrate to Canada. After more than a year, however, my branch of the family entered the United States and ultimately settled in an upstate New York village. That was a special time, a momentous event for nonno Raffaello e nonna Viola.

Although educated, my grandfather found few employment opportunities other than menial jobs, but he gladly worked them, as did his children to help out when they reached adolescence. As the family's lot improved, so did nonno's English proficiency. He took a chance, borrowed some working capital, and developed a laundry and dry cleaning facility. Through hard work, honesty, and selfless commitment, the fledgling business soon prospered.

My grandparents were inspired enough by the ideals of liberty and opportunity to leave all that was familiar behind, cross an ocean to an unsettled future, and literally risk everything. For the remainder of their lives, their gratitude for America was unbounded, and as such was infused in their children and grandchildren as well. I am happy to report that nearly all of their male progeny (and one female) proudly served in the U.S. armed forces, were (and remain) imbued with civic responsibility, and give thanks each day for the miracle that is the United States of America.

Although family members now happily reside in nearly every state of the Union, our nonni's dream also remains alive through us.